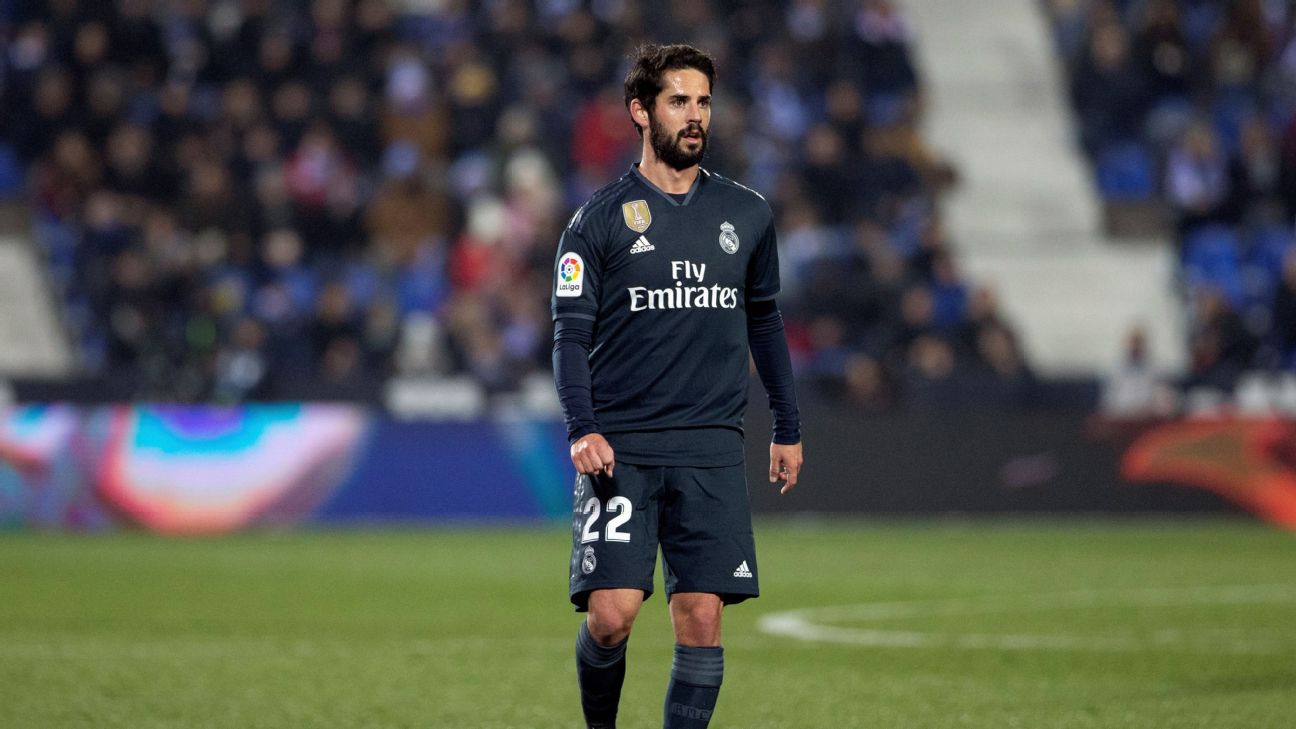 Real Madrid made very heavy work of qualifying for the Copa del Rey quarterfinals, winning 3-1 on aggregate over Leganes. Despite Leganes dominating Wednesday’s last-16 second leg at Butarque, Los Pepineros were only able to manage one goal.

Just 12 months after going out of the Copa to their suburban neighbours in the quarterfinals, Los Blancos did enough to progress to the last eight on a night when Atletico Madrid crashed out. No new fitness problems was also a plus — considering they are already missing eight players through injury.

It can be difficult to get the motivation right starting 3-0 up from the first leg, but five different Madrid defenders losing individual duels in the lead-up to Martin Braithwaite‘s goal was a sign their heads were not right. With some better finishing the minnows could easily have got a couple more goals and made things really interesting.

5 – Tactical confusion did not help Santiago Solari’s team in the first half as an experimental 4-2-3-1 shape did not work at all. The return to the usual 4-3-3 after the break at least had most of his players in their usual positions, but did not stop Leganes from regularly creating chances to get back into the tie.

GK Keylor Navas, 7 — Got away with a dodgy punch when coming for a corner midway through the first half, then made a couple of impressive and vital saves during the closing stages when Leganes finally started hitting the target with their opportunities.

DF Alvaro Odriozola, 6 — Not nearly as prominent in attack as in the first leg, and appeared under instructions to stay at home more given the aim for the evening was to protect the lead. DF

Nacho, 6 — Among those at fault as Madrid’s central defence disappeared for Braithwaite’s opener. Still working his way back to match-fitness following recent injury absence.

DF Raphael Varane, 7 — The steadiest of the back four, he made a critical intervention when th game got stretched in the second half to stop Braithwaite from racing clear one-on-one with Navas.

DF Marcelo, 6 — Recalled to the team in a midfield role in the first half, then returned to defence when that clearly wasn’t working. Did nothing to suggest he deserves to be back in the XI in any position for Saturday’s La Liga game against Sevilla.

MF Casemiro, 6 — Out-battled by Leganes’ midfielders especially during the first half when Los Blancos were struggling to get any grip on the game.

MF Federico Valverde, 6 — Another start for the youngster who is a firm favourite of Solari, but he seemed unsure whether to stick or twist here and ended up letting the game pass him by.

MF Lucas Vazquez, 6 — The winger played very deep in the first half, making one useful intervention at 0-0 in his own box. That said, was among those at fault for Leganes’ first goal. Contributed very little from an attacking sense.

MF Isco, 4 — Just a third start since Solari took over, and he did little to suggest he really cares about changing the manager’s mind, whether as a No. 10 in the first half or a false nine after the break. There is clearly something broken in his relationship with the cause at the moment.

MF Sergio Reguilon, 6 — Started at left-back, then switched with Marcelo after the first goal came down their side. His wandering ended at the break when he was replaced by Dani Ceballos.

FW Vinicius Junior, 6 –– Started at centre-forward and was often isolated, although he made one chance for himself which he fired just wide. He was moved back to the wing in the second half where he linked more with teammates but continued a shoot on sight policy which did not bring any success.

MF Dani Ceballos, 7 — Entered at half-time to bring some order to things in midfield and helped Madrid have a bit more of the ball at least.

FW Cristo Gonzalez, 6 — Castilla centre-forward replaced Isco but was barely involved with most of the play down the other end during the closing stages.

MF Brahim Diaz, N/R — Came in for Lucas during the last few minutes as Solari looked to run down the clock, and almost got a first goal for Madrid when set up on the break by fellow youngster Vinicius.