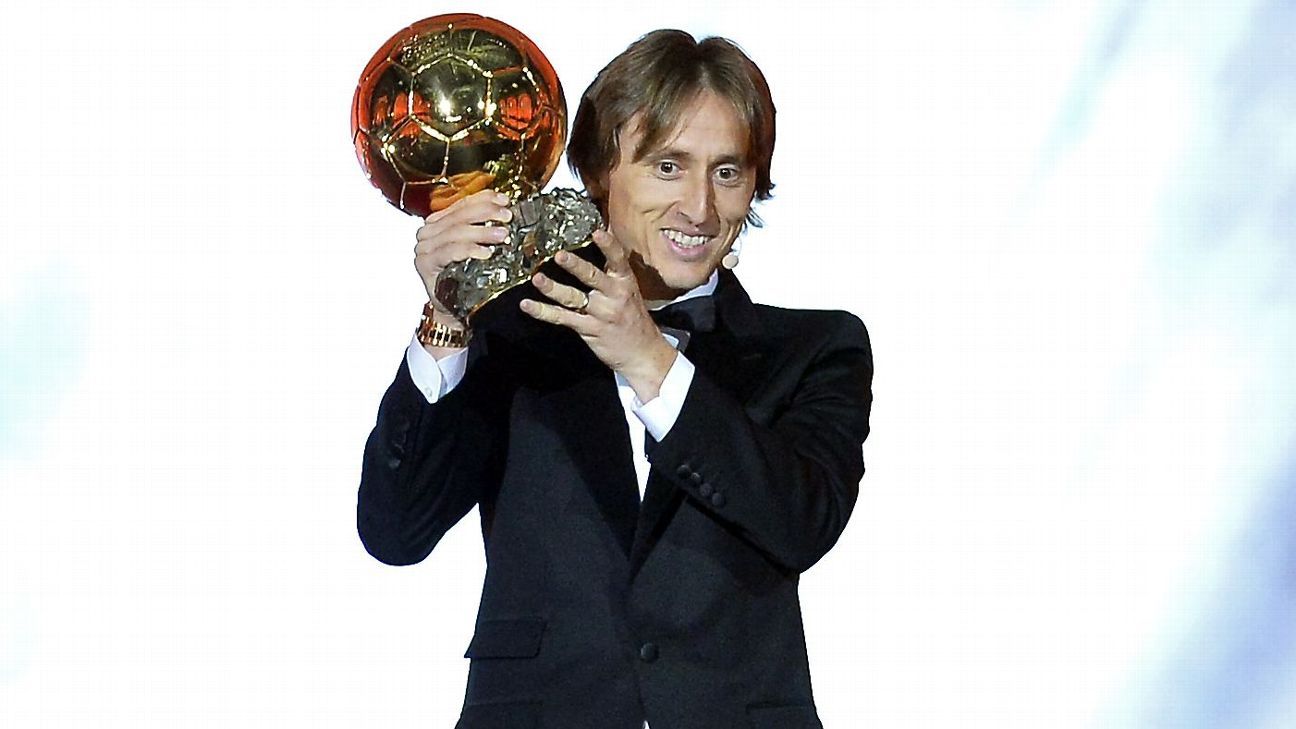 PARIS — You almost felt sorry for Luka Modric, receiving the Ballon d’Or (“Golden Ball”) for player of the year on stage in Paris’ Grand Palais. It looked as if the French were punishing him Monday for depriving one of their world champions of the prize.

There, on a table beside the stage, taunting him, stood the World Cup trophy itself, the one that his Croatia team lost in the final in Moscow this past July. On stage, David Ginola, the former France winger turned moderator, was throwing fatuous questions at him: “Is it a dream come true?” Modric, who always looks like a cross between a fisherwoman and Johan Cruyff circa 1973, wasn’t made for the high life, and you sense that appearing on stage was more terrifying for him than playing in a World Cup final.

Meanwhile, fans on social media were howling almost in unison that he didn’t deserve the prize. Whether that’s true or not, he certainly deserved better than this bizarre night.

The magazine France Football conceived the Ballon d’Or in 1956 (Stanley Matthews won the first one) and it has come home to Paris. Just two days after the “yellow vest” protesters against President Emmanuel Macron left the Champs-Elysées submerged in fire and tear gas, French rappers, Paris St-Germain keeper Gianluigi Buffon and an array of beautifully dressed young Parisian VIPs descended on the adjoining, vast, high-domed Grand Palais, eager to celebrate their own. Imagine the joy if Antoine Griezmann or Kylian Mbappe had been crowned here.

Ginola greeted onlookers with, “The suspense is fatal!” But it wasn’t. A couple of hours before the ceremony, the ranking of the top 30 players had leaked online and almost the entire Grand Palais had seen it. For the first time since Kaka’s victory in 2007, neither Lionel Messi nor Cristiano Ronaldo had won the Ballon d’Or. This year, we read on our phones, Messi had finished fifth, Mbappe fourth, Griezmann third, Ronaldo second and Modric first. It was going to be a long night before we were told what we already knew.

But before that, there were two new trophies to award. First was the Raymond Kopa Trophy for best player under 21. A cloud of smoke filled the balcony, and from it appeared — to no surprise at all — Mbappe. Such is his charm and sprinter’s physique that he could pull off wearing brown brogues under his dinner jacket. His father, Wilfried, his former youth coach, murmured in a wobbly voice, “The pride in seeing that the little one has grown up.” The French coach, Didier Deschamps, recalled Mbappe’s unforgettable rush in the World Cup against Argentina: “I imagined myself in the place of the players who were facing him.”

Still, he pointed out later, having finished seventh in the adult rankings last year and fourth this year (the youngest player in the top five since 19-year-old Michael Owen in 1998), he seems to be creeping inexorably upward. If Messi and Ronaldo turn out to be mortal, he could be next in line.

The other new prize, the female Ballon d’Or, went to Ada Hegerberg of Norway and Olympique Lyon. When she thanked (among many other people) Lyon’s president, Jean-Michel Aulas, the Parisian audience booed merrily while Ginola implored them to stop.

“It’s a huge step for women’s football,” Hegerberg said. “I would like to end with some words to young girls all over the world: Please, believe in yourself.”

All would have been fine if the segment had ended there. But the DJ of the evening, Frenchman Martin Solveig, seemed desperate to prove that the new prize hadn’t put a dent in soccer sexism. “Do you twerk?” he asked. Hegerberg turned away in disgust: “No!” Perhaps the French organisers will get their act together before hosting next year’s Women’s World Cup.

There was a French interlude during which Mbappe, Griezmann, Deschamps and France midfielder Thomas Lemar took the stage. “Go get the cup,” Ginola said to Griezmann, as if to a child, and Grizi dutifully skipped the 20 yards to the table where the golden trophy was waiting. The crowd cheered, and we got last summer’s hit song — Vegedream’s “Ramenez la Coupe a la Maison” (“Bring home the cup”) — accompanied by images of joyous crowds on the Champs-Elysées welcoming the team back. But it seemed like pictures from another time. The mood in France has soured since, the yellow vests expressing a national discontent.

Ginola didn’t mind. He held the cup and gloated: “It’s heavy and it’s beautiful.” Every French soccer fan in the hall remembered the Parisian night 25 years ago when Ginola, instead of holding onto the ball and playing out a draw at home against Bulgaria, hit a pointless cross. The Bulgarian keeper caught it, and from the counterattack the Bulgarians scored the winner, keeping France out of the 1994 World Cup. Deschamps was playing that night, too, and Ginola has not been his favourite person since. Onstage, though, the coach held it together.

The trophy returned to its place for Modric’s appearance, which the Croat looked determined to rattle through as quickly and nondescriptly as possible. He seemed to have memorised his speech in English: “I have sensational emotions at the moment that is hard to describe with words,” he droned, sounding like a bad internet translation engine. When Ginola asked for the secrets of his success, he answered: “Hard work, persistence at difficult moments, believe in yourself.”

He did give a nice shoutout to his Spurs manager, Harry Redknapp, who had moved him from No. 10 to the back of midfield, the position from which he went out to achieve greatness. Mbappe, asked if he was disappointed not to have won the Ballon d’Or, offered a jibe at Modric: “I just feel pride to be on the podium, to be world champion”.

The most touching moment was provided, via video, by Modric’s father. Hearing that his son had won soccer’s biggest individual prize, he laughed, clasped his hands as if in prayer, said, “You are my genius,” then started a losing battle against tears.

Modric certainly isn’t as good as Ronaldo or Messi. His stats for 2018 are 56 matches, 11 assists, three goals for club and country. The only Ballon d’Or winner with fewer was Lev Yashin, the Russia keeper, in 1963. Even Modric’s World Cup numbers aren’t astonishing: two goals (including a penalty) and one assist. But then midfield players like him (or Xavi, or Paul Scholes) who rarely speak or score get almost as little respect as defenders. Nobody else in Russia this summer controlled the tempo of games the way Modric did. To have led a team with a club-level back four, from a country of four million people, to a World Cup final is an achievement that merits this prize. The Ballon d’Or has never been just an assessment of quality. It also rewards something slightly different: achievement in the biggest moments. It’s good that future generations will know that the soccer of our time was more than just Messi and Ronaldo.

And few winners of this award have made a longer journey than Modric. At 5 years old, growing up in what was then Yugoslavia, he fled the country’s civil war with his parents. Serbian militants shot his grandfather and burned down their home. The family ended up spending seven years as refugees in a hotel in the village of Zadar, on Croatia’s Dalmatian Coast, a region that supplied nearly half the squad that got to the final in Moscow. Between bombs and grenades, Modric played soccer in the hotel parking lot.

The Ballon d’Or might not even have been the best thing that happened to him Monday. That same day, a court in Croatia decided he wouldn’t be prosecuted for giving false testimony at the trial of former Dinamo Zagreb boss Zdravko Mamic.

Modric is 33, playing in a struggling Real Madrid team, so this could be his last hurrah, a sort of oeuvre prize. He will go down in history among the many Ballon d’Or winners who fell just short of greatness — players who sit in the “second row,” in the phrase of Marco van Basten, who considered himself one of them, such as Oleg Blokhin, Kevin Keegan and Allan Simonsen.

Then next year, quite likely, Messi or Ronaldo will be back on stage.

Simon Kuper is a contributor to ESPN FC and co-author, with Stefan Szymanski, of Soccernomics.