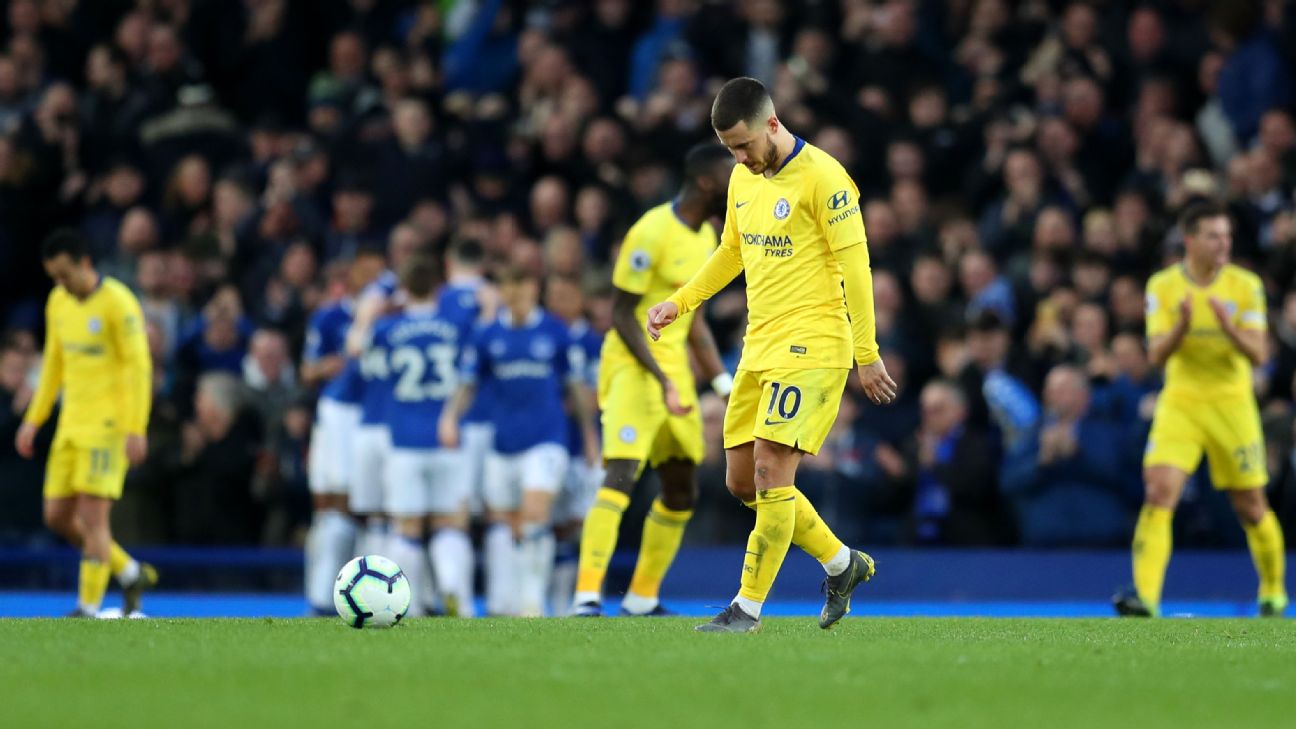 LIVERPOOL, England — Ross Barkley endured an unhappy return to Goodison Park as goals from Richarlison and Gylfi Sigurdsson struck to help Everton win 2-0 and deal another significant blow to Chelsea’s chances of a top-four finish in the Premier League.

Chelsea were excellent in the first 45 minutes without scoring, pinning Everton back with possession, moving their defence around and creating several good chances. There are signs that Maurizio Sarri’s system is working — up to a point — and that his players are still committed to executing it.

This will be a sickening defeat for Sarri given Chelsea’s first-half dominance, and they have let too many Premier League points slip away in this fashion. The competition for a top-four finish has never been this fierce and, with eight games left, all of the other contenders have more attacking firepower.

6 — Sarri’s starting XI worked in terms of yielding tactical dominance, and he can’t help it if his players miss a succession of chances. He even switched to 4-2-3-1 again once Chelsea went 2-0 down, but this performance should give him cause to think that one or two of his regular starters should be dropped.

GK Kepa Arrizabalaga, 5 — Showed his agility to make some eye-catching saves before and after Chelsea fell behind, but was culpable for both goals. Gifted the ball to Richarlison for Everton’s first by parrying Dominic Calvert-Lewin’s header back into danger, then repeated the mistake for Sigurdsson’s penalty.

DF Cesar Azpilicueta, 5 — Did not provide much in the way of attacking support on the right and sold himself a little too easily defensively as well. Calvert-Lewin out-jumped him for Everton’s only first-half chance — a moment that foreshadowed what was to come.

DF Antonio Rudiger, 6 — Calvert-Lewin did not present him with many problems from open play, though the Everton striker’s aerial presence proved decisive for the hosts. Rudiger’s scrambling instincts saved Chelsea from further damage as they pushed up in search of a comeback, but the damage had been done.

DF David Luiz, 6 — Managed to panic Everton’s defence with a couple of incisive long passes and distributed the ball well even when pressed. Was not directly at fault for either of Everton’s goals but, despite being one of the biggest personalities in this team, was unable to steady the ship either.

DF Marcos Alonso, 5 — His overlapping runs created problems for Everton in the first half and on occasion he picked out teammates with smart crosses. Could not deal with Everton’s wing attack after the interval though, and his clumsy reach conceded a needless penalty that put Chelsea in a world of trouble.

MF N’Golo Kante, 7 — Managed to outwork Everton’s midfield almost on his own in the first half as Chelsea dominated. Always looks a little incongruous surging forward as Chelsea attack, but created a good shooting chance for Gonzalo Higuain with a smart lay-off from a long Luiz pass.

MF Jorginho, 6 — Had a very good first half, underpinning Chelsea’s possession dominance by breaking up Everton counters at the source. His chipped pass played Higuain clean through and he tested Jordan Pickford himself with a low shot. The game felt like it got a little too quick for him after the break though.

MF Ross Barkley, 6 — The hostility began before the first whistle with Everton supporters cheering every shot he missed in the warm-up, and he seemed determined to play well on his Goodison Park return. A bright first half yielded no tangible reward though, and he faded in the second before being substituted.

FW Pedro Rodriguez, 5 — His only clinical finish of the afternoon was disallowed by the linesman’s flag. Sliced one presentable first-half opportunity wide from Alonso’s nice cutback, and while he had some nice moments, it seems the speed and precision that defined his prime years can no longer be expected.

FW Gonzalo Higuain, 5 — Has now scored just three goals in 10 appearances for Chelsea since his January arrival. His link-up play and movement are sharp enough, but his lack of speed limits his team’s ability to stretch opponents. Was too slow to convert one first-half chance and forced only one save from Pickford.

FW Eden Hazard, 5 — Was a menacing presence early, forcing one save from Pickford and striking the post with a deflected effort, but his influence waned once Everton came into the game. Should have scored with a shot that Michael Keane blocked as Chelsea desperately chased a comeback.

MF Ruben Loftus-Cheek, 6 — Brought more physicality to Chelsea’s midfield when he replaced Barkley, but his work lacked the same precision he has displayed in recent weeks. Maybe the Dynamo Kiev minutes were still in his legs.

FW Olivier Giroud, 6 — Did not have much opportunity to make a positive impact here, but there is a growing case for the Frenchman to start ahead of Higuain.

FW Callum Hudson-Odoi, 7 — Direct and aggressive with his running whenever he got the chance, almost scoring with one fierce shot that Pickford tipped over.