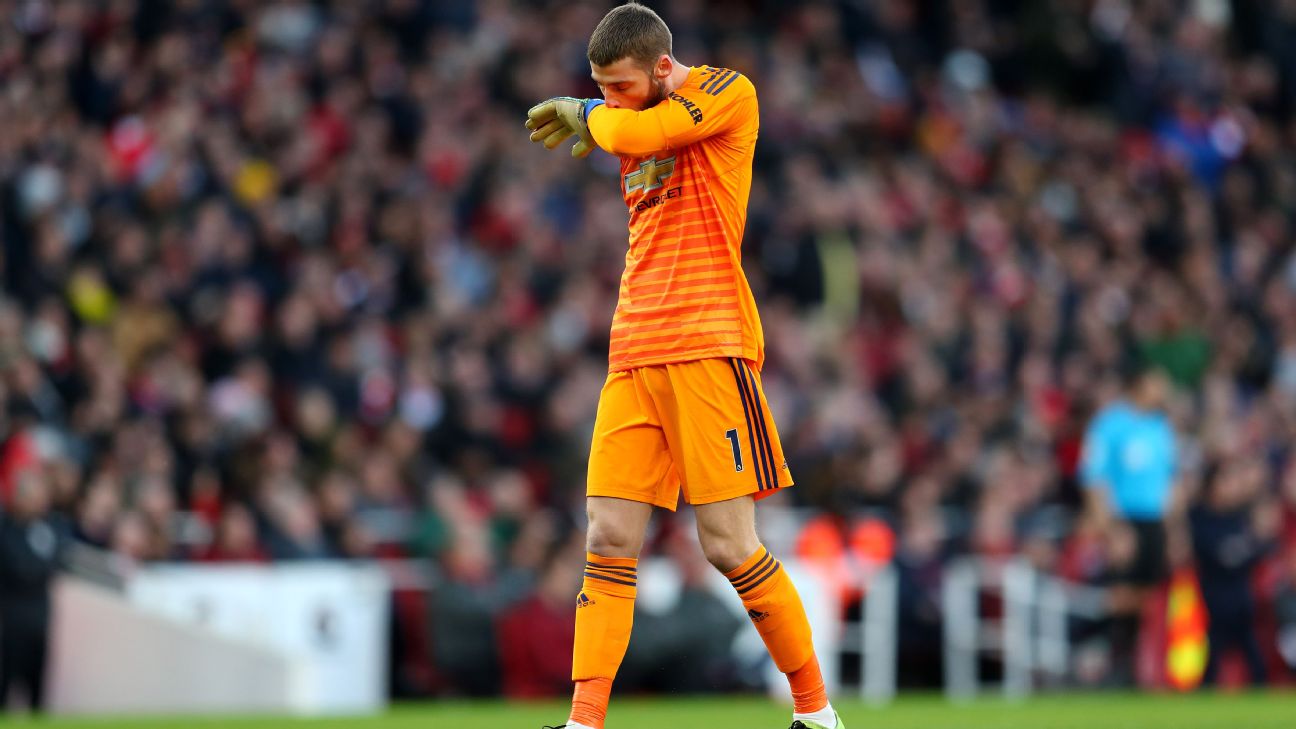 LONDON — Ole Gunnar Solskjaer’s unbeaten run in the Premier League came to an end as Manchester United lost 2-0 to Arsenal at the Emirates on Sunday. In the 200th league meeting between the sides, Unai Emery’s team ended United’s run of nine straight away wins under the Norwegian to move back into fourth place in the Premier League table with eight games to go.

Granit Xhaka scored with a long-range effort that swerved past David De Gea after 12 minutes before Pierre-Emerick Aubameyang doubled the lead in the second half with a penalty after referee Jon Moss decided Fred had brought down Alexandre Lacazette. The result leaves United fifth in the table, two points behind Arsenal in the race for a top-four finish and Champions League football next season.

Luke Shaw is strengthening his case to be named in the PFA Team of the Year for the first time since he was a teenager at Southampton, and Mason Greenwood, just 17, looked confident at this level in the 10 minutes he got at the end after replacing Nemanja Matic.

De Gea won’t want to see Xhaka’s goal again. He didn’t see it until late, it swerved and Matic and Fred could have done more to help out and put pressure on the ball. Still, it didn’t look great and, from 25 yards out, it was one the Spaniard would expect to save. And Romelu Lukaku‘s struggles against the Big Six continued, hitting the woodwork from close range with the game still goalless and very much in the balance.

6 — Solskjaer brought back Matic and Paul Pogba and kept his faith in Fred after the Brazilian’s positive performance in Paris on Wednesday. His decision to start Pogba on the left wing contributed to United’s slow start but once the Frenchman was moved inside closer to Matic and Fred, they were the better team. He will argue the penalty that killed the game was a harsh one.

GK David De Gea, 5 — Had a blinder at the Emirates in the league last season but was wrong-footed from a long way out for Xhaka’s goal. Should have done better.

DF Ashley Young, 6 — Back at right-back after a stint in midfield in Paris, he made a crucial challenge on Lacazette when it looked like the Frenchman was about to make it 2-0. Had his hands full with Sead Kolasinac raiding down Arsenal’s left.

DF Luke Shaw, 7 — Did well to crowd out Lacazette under De Gea’s nose after a dangerous cross from Kolasinac. Inviting ball into the penalty area when Romelu Lukaku hit the crossbar.

DF Victor Lindelof, 7 — One of the key changes Solskjaer has made has been to give Lindelof licence to start attacks from the back, and it was noticeable that Arsenal tried to put him under pressure to stop it happening.

DF Chris Smalling, 7 — Made his 200th league appearance for United. Recovered from an ill-timed slip to race back with Aubameyang in the first half and mop up the danger.

MF Nemanja Matic, 6 — Back after missing four games with a groin injury. Could have done more to get out to Xhaka as the Arsenal midfielder lined up his speculative effort in the first half.

MF Paul Pogba, 6 — Started the game almost as a left winger but United looked a much better team when Solskjaer changed his system after 30 minutes and he moved inside. Will have wanted to have more effect on the game.

MF Fred, 7 — Kept his place after his best United display against Paris Saint-Germain. Hit the post from the edge of the box in the first half and was unlucky to give away a soft penalty that Aubameyang scored to make it 2-0.

FW Diogo Dalot, 6 — Created a chance for Fred with a clever cutback to the edge of the box in the second half. Replaced by Anthony Martial as United chased the game.

FW Marcus Rashford, 6 — Beautifully weighted pass to send Lukaku through in the second half and went close with a free kick but was otherwise on the fringes.

FW Romelu Lukaku, 6 — His general play was good but he should have scored with at least one of the three chances he had. Hit the bar from inside the six-yard box with the game still goalless.

FW Anthony Martial, N/R — Didn’t see much of the ball.