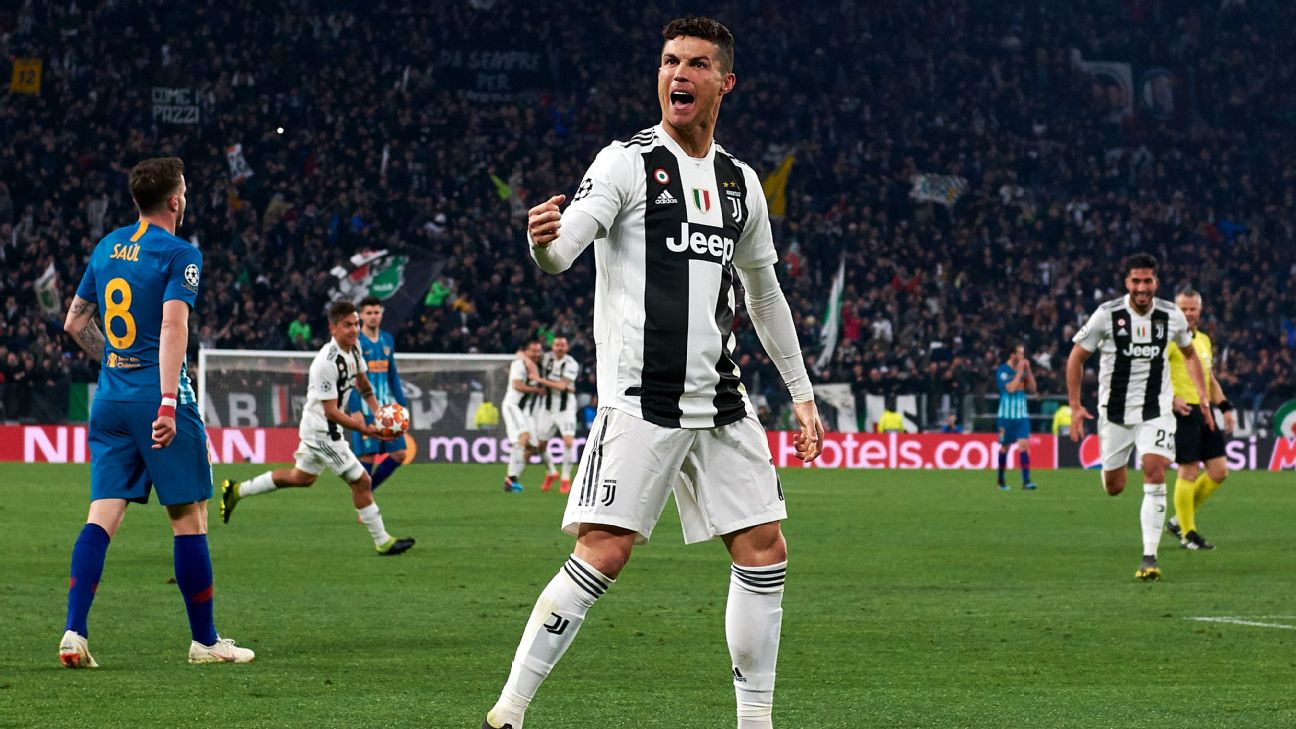 This was the archetypal two-legged European tie, a contest that outlines the difficulty of playing away from home in a hostile atmosphere. It was essentially won by the Italian champions because they pressed home their period of dominance more ruthlessly, courtesy of a European Cup specialist. It was also won because of Cristiano Ronaldo, the man Juve brought to Italy for these very moments.

It felt almost inevitable that if Juventus managed an incredible comeback, the goals would come from Ronaldo, the man who has so regularly punished Atletico Madrid. Incredibly, the last four hat-tricks scored against Atletico have been scored by him, and he put Juventus on course for victory with two classic headers and the type of goals Juve have scored so regularly this season: a deep, far-post cross and a late run to overpower a smaller full-back.

It’s a simple tactic, but it continually proves crucial and is the reason the Italian champions made it through to the quarterfinals.

Ronaldo’s manager, Max Allegri, also deserves credit for he won the tactical battle. Against a dull, lifeless and overwhelmingly negative Atletico 4-4-2 — maybe it should be considered a 4-4-2-0 given the deep positioning of Alvaro Morata and Antoine Griezmann — Juve played some savvy, shrewd football.

On paper, they appeared to line up in a 4-3-3. At kick-off, they were in a 4-3-3. But two minutes in, midfielder Emre Can waved Joao Cancelo higher up the pitch, dropped in to play as a right-sided centre-back and Juventus shifted into a 3-4-3. They distributed the ball smartly at the back, the central midfielders remained in solid positions to prevent Atleti counter-attacks and the wing-backs could focus on putting crosses into the box.

They were also able to find Ronaldo in the positions where he is most dangerous.

This was always likely to be Juve’s approach, especially against a side that defends so narrow, and with Ronaldo’s aerial power to depend upon. The impressive thing is that they managed it despite being depleted out wide. With Alex Sandro suspended, Leonardo Spinazzola pushed forward well in his place and Cancelo attacked with intent, if not always finesse. Miralem Pjanic switched play unfussily between them to keep Atletico chasing shadows.

The extent of Juve’s determination to cross from wide positions for Ronaldo was summarised by their opener, assisted by the impressive Federico Bernardeschi, who delivered the ball from a position that would not generally be considered a crossing angle. Bernardeschi is a creative player, a natural No.10 inclined to dribble or play a through-ball. Here, he was only thinking about hanging the ball up to the far post, inviting Ronaldo to make his familiar run and his usual header.

The second goal was almost a mirror image of the first, with Ronaldo unsurprisingly getting the better of the slight Santiago Arias; it was a mis-match from the moment the team sheets were released. Omitted from the first leg due to his lack of aerial ability, injury problems here meant Simeone had no choice but to use the slight Arias on that flank.

This time the crosser was Cancelo, albeit from a more typical position. Ronaldo’s header was equally powerful and while it initially appeared Jan Oblak had made a miraculous save, the referee’s watch alerted him to the goal-line technology notification.

At 2-2 and back in the tie, Juventus could have gone into their shell and focused on preventing the away goal that could have put Atletico through. Instead, Allegri turned to Paulo Dybala, sacrificing left-back Spinazzola: a fourth attacker on, a defender off. In a tie dominated by cautious managerial thinking from the away sides, the home side boldly went all-out in search of the winner.

Another substitute, Moise Kean, nearly scored the tie’s winner on a breakaway but this is the Champions League, Ronaldo’s stage, and therefore there was only one obvious hero. Bernardeschi, shifted from the right to the left after Dybala’s introduction, dribbled determinedly inside, toppled to the ground under contact from Angel Correa in the box and Ronaldo stepped up to power the penalty home.

Another incredible Champions League comeback, and another Ronaldo hat-trick: the 52nd of his career.

There must be some serious questions asked of Atletico in the wake of Wednesday’s defeat, particularly the ultra-negative approach employed by Simeone. Atleti concentrated solely on keeping a clean sheet rather than scoring an all-important away goal and then poorly defended their box. Even in stoppage time, when Atleti needed a goal in the remaining 90 seconds, all 11 players were gathered around their own penalty area to defend a Juventus throw-in. They appeared incapable of switching to an attacking approach when required, as if the situation had never even entered Simeone’s mind.

In the end, though, this was Ronaldo’s night.

“This is why Juve brought me in: to help on magic nights like this,” he grinned afterwards. And that really is Ronaldo’s role here in Turin: Champions League specialist. Juventus have won seven league titles in a row, and would have won an eighth with or without him. Their huge investment in Ronaldo was about getting over the final hurdle in Europe, after two final defeats in recent years, and therefore there was considerable pressure upon him to deliver in this tie.

Only Clarence Seedorf has won this competition with three sides. Now, in an open competition with some serious contenders already eliminated, Ronaldo has a serious chance of following victories with Manchester United and Real Madrid with another at Juve.

Others may have won more league trophies but the Champions League is increasingly Ronaldo’s competition.