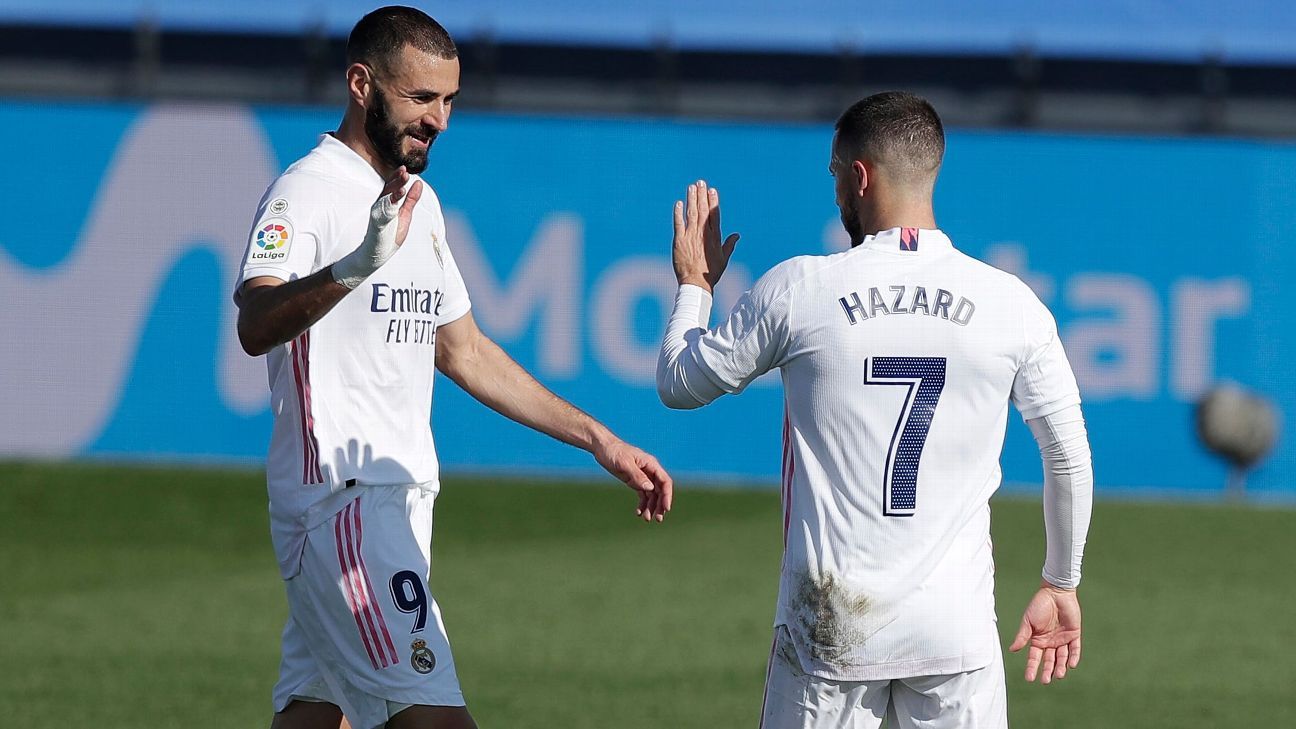 Eden Hazard scored a stunning long-range strike and Karim Benzema grabbed a brace as Real Madrid beat Huesca by the score of 4-1 in La Liga on Saturday.

The visitors looked dangerous early on as forward Rafa Mir fired just wide, while Hazard found the roof of the net with an improvised flick and Sergio Ramos had a header saved. Hazard opened the scoring after 40 minutes with a swerving left-footed shot, and Karim Benzema doubled Madrid’s lead before half-time.

Madrid increasingly dominated as the match went on, Fede Valverde scoring a third when spotted in space by Benzema. Huesca’s David Ferreiro pulled a goal back, and Benzema added a close-range fourth late on.

Hazard started slowly, looking a little rusty, but exploded into life with his goal. After 392 days without finding the net for Real Madrid, it was quite a way to announce his return to the starting XI.

Injuries have meant Zinedine Zidane had never previously been able to field what is theoretically his first-choice attacking trio — Hazard, Benzema and Marco Asensio — in a competitive match. Here, two of the three scored, although Asensio is still a work-in-progress.

The row over Benzema’s alleged criticism of Vinicius was forgotten, too, with the French forward scoring twice and the Brazilian youngster coming off the bench. The pair notably looked to exchange passes more than once in their time together on the pitch.

Once again, Real Madrid’s defence looked much more vulnerable here than coach Zidane would like. Huesca’s No.9, Rafa Mir — a once highly-rated youth prospect, but not exactly a top striker — gave Eder Militao and Sergio Ramos all kinds of problems in the first half. Also, Madrid’s struggles to break down a packed defence sitting deep continued here too. It was only a wonder goal from Hazard that broke the deadlock.

7 — Zinedine Zidane made four changes from the team that drew 2-2 in Germany in midweek. Eder Militao and Marcelo came into the defence, Luka Modric replaced Toni Kroos in midfield and Eden Hazard made his first start of the season in attack.

Militao and Marcelo do not inspire confidence at the back, but in the end it was a good afternoon for Zidane’s team. His first change was forced, Mendy replacing Lucas Vazquez, before the coach was able to give Hazard, Asensio, Valverde and Casemiro some rest ahead of more Champions League action in midweek.

GK Thibaut Courtois, 6 — While Huesca threatened, they only produced two shots on target. There was nothing Courtois could do about their goal.

DF Lucas Vazquez, 7 — Zidane’s preferred right-back with Dani Carvajal, Alvaro Odriozola and Nacho missing. Grabbed an assist, crossing for Benzema to make it 2-0. Subbed off with a knock after 50 minutes.

DF Eder Militao, 6 — His first start since the defensive horrorshow against Shakhtar in which Madrid conceded three goals in 13 minutes. Tested by Rafa Mir’s pace and strength throughout, beaten in a foot race early on and shoved to the ground by the forward before half-time.

DF Sergio Ramos, 7 — His 500th La Liga match. Had a header well-saved in the first half, and otherwise looked good without excelling.

DF Marcelo, 7 — There’s no doubt the team looks defensively weaker when the Brazilian replaces Mendy. All four of Madrid’s league defeats since the start of last season have come with Marcelo in the side. He provided some dangerous crosses here but was once again found wanting at the back.

MF Casemiro, 7 — Solid. The Brazilian is often noticed as much in his absence, and it was hard to ignore the fact that when he went off here, Huesca scored not long afterwards.

MF Fede Valverde, 8 — Fired an unstoppable low shot past Fernandez for Madrid’s third goal to finish off the match as a contest, and got an assist too. Has been getting better and better — and consequently, harder to leave out — in recent weeks.

MF Luka Modric, 7 — Started here and contributed a busy performance after coming off the bench to great effect against Barcelona and Borussia Monchengladbach. The only midfielder to play 90 minutes.

FW Marco Asensio, 6 — Very quiet early in the game to the point of being anonymous, but improved before being withdrawn after an hour. Involved in the build-up for Madrid’s third goal.

FW Eden Hazard, 8 — Played 60 minutes in his first start since August, after an encouraging 20-minute cameo in midweek. Nominally on the left, but frequently switched places with Benzema. Scored an absolutely stunning goal.

FW Karim Benzema, 9 — Looked unfazed by the row over his alleged criticism of Vinicius. Scored a well-taken goal, controlling with his chest before firing past Fernandez, picked out Valverde for Madrid’s third, and then scored a poacher’s finish at the death.

FW Vinicius Junior, 6 — Came on and immediately embarked on a mazy run that ended setting up Benzema to miskick, when a goal would have provided the perfect closure to this week’s fuss.

FW Rodrygo, 8 — Hasn’t featured much lately, but looked lively here on the right. One good run set up Isco and another saw his own shot saved. Did well to set up Benzema for his second.

MF Isco, 7 — His first appearance since being hauled off at half-time against Cadiz. Some nice moments of skill. Couldn’t convert when found by Rodrygo at the near post.