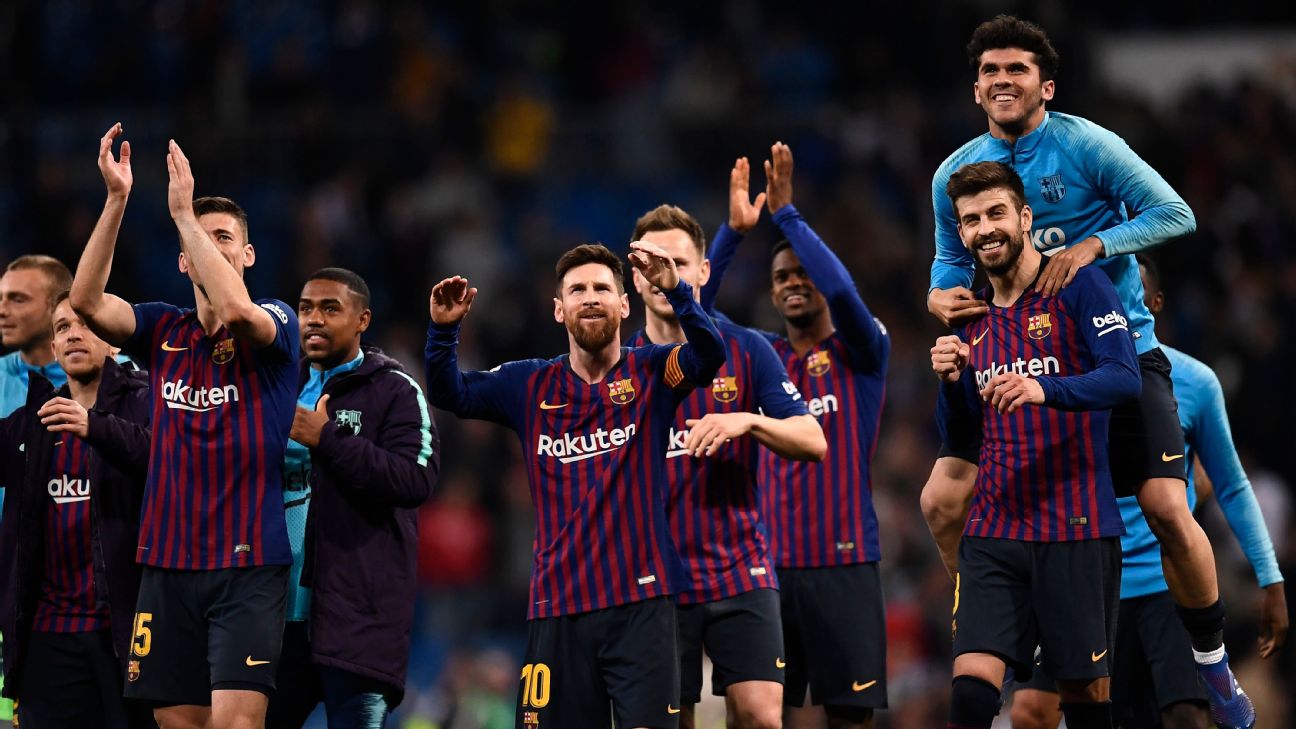 So extraordinary has this week been for both Real Madrid and Barcelona that I think it’s worth stopping and reflecting on the calibre of gun barrel down which Barca were staring at half-time last Saturday in Sevilla.

With the fates having arranged that the reigning Spanish champions, in limp form at the time, had to play Sevilla away and then face Real Madrid at the Bernabeu twice in the space of 72 hours, you’d have been forgiven for indulging in some doomsday thinking. Losing 2-1 at half-time in the Sanchez Pizjuan, far stranger things have happened than Pablo Machin’s side holding on to their lead. And while Madrid wouldn’t have considered their 1-1, first-leg draw at Camp Nou in the Copa Del Rey semifinal last month as a definitive result, it was an advantage that, in front of their own fans in the Spanish capital, could easily have been converted into qualification for the final.

Talking of staring down the barrel, had both of those first two results gone against Barcelona as they easily could have, especially given Madrid’s superior first half display last Wednesday when they actually looked the more likely side to qualify for the final in May, then what price Barca could you get on them losing again in the Liga Clasico?

Two defeats could have been sufficiently bitter medicine to cause schisms within the squad, undermining or even corroding the titanium-tough unity they’ve gone on to demonstrate during this quite extraordinary week. If they had lost to Sevilla and Madrid, Ernesto Valverde’s team would have seen their currently brutal lead at the top of the table trimmed to just three points over Madrid and, potentially, just a point over Atleti.

I know these are hypotheticals. But in the first two cases, Barcelona flirted with them happening; if you are naive enough to believe that these kind of “what if?” thoughts don’t plague the psyches of most players and coaches, then you don’t know them like I do.

This could have been seven days of apocalyptic gloom for the Camp Nou club. “End of era” editorials would have been written, Ousmane Dembele (rather than Vinicius Junior) would be getting the “is he really that good” treatment, gigantic abuse would be being heaped on a Barcelona board that’s just seen fit to renew Valverde’s contract and Barca would be left clinging onto the hope that their 0-0 away draw against Lyon couldn’t be overturned by the French team, thus instantly turning a promising season into a ravaged and desolate wasteland.

All of the above could have happened. The wafer-thin margins are sharp, liable to cut, slash and scar. That’s the nature of living on a knife-edge.

Gerard Pique, Leo Messi, Sergio Busquets and Jordi Alba, having been part of an armada of Blaugrana players and staff who made their way across to the couple of thousand Barca fans roaring their ecstasy into the night sky of Spain’s capital, insisted that the entire squad form what’s popularly known as “a huddle.” The outsized eight-some began to rotate and jig and then jump up and down, arms interlocked and heads bowed down into the middle, as the group of players who’d completed one of the most testing, gruelling and important weeks of football in modern European history was overtaken by adrenaline, self-congratulation… and relief.

To come into this week-long football inquisition on pretty stale form and beat not only Sevilla but the European champions —twice — in a week is exceptional. But to do it on an 8-2 aggregate across three away matches is just sensational. Particularly as neither of the two clubs who constitute the 90+ years of the Clasico rivalry had ever even played twice at their rival’s headquarters twice in three days, let alone won twice away from home in the space of 72 hours!

We live in an age of high-tech football. Players wear straps stuffed with microchips so that their employers can monitor their physiology. Right now, the players who entertain us at this elite level are monitored from the length of their toenails to the speed of their red blood cell movement, from the the wellbeing of their wisdom teeth to the elasticity of their knee ligaments and hamstrings. What bucked that trend here and what will never, in the entire future of this beautiful sport, be replicated by machine, artificial intelligence or cryogenics, is the basic, fundamental “I will not be beaten” human instinct that, when shared across a group of like minded men or women, is not only indistructable but awe-inspiring to witness.

A week ago, Barcelona won because, as Ben Yedder stated very clearly and seductively, Sevilla were humans against aliens. “We might have won this match in this world but [Lionel] Messi’s from another planet” was the gist of his homage, even after the bitter disappointment of losing 4-2 from a 2-1 head-start.

That Messi hat-trick, plus an luxuriant assist for Luis Suarez, unlocked the week. It was stellar, stunning and football’s equivalent of a lunar voyage, but it also inspired a “we won’t let you down, Leo” reaction from his teammates.

By Wednesday, it was systems, strategy, passing style and savvy that unlocked their “back off the ropes” victory over Madrid. Los Blancos were suckered, then Blaugrana rope-a-doped. Generations of Cruyff-learning drew a collective of talented individuals into committing crucial errors via which Barca undid them. It was a bit like a police interrogation, a long and tiring, but scrupulously constructed, interview of a suspect they know will crack, will contradict himself and will eventually lose patience: that was what we saw in midweek. Poke, jab, offer the chance to trip yourself up and… Presto!

Saturday’s result, which ensured that Madrid are no longer a threat in La Liga and that, in the minds of Barcelona’s players, meant that they’ll be champions by early May at the latest, was something else again, the product of vast, brave and gutsy dollops of pugnacious defiance. Blocks, sinew-stretching tackles, unfeasible headed clearances, support play, covering for displaced teammates, naked conviction, a willingness to keep risking the right passes, constant shuttling about to “show” for the ball, to create angles via which pass-move-pass triangles of possession could be created.

Above the madding crowd in Madrid stood Pique. This is a man with a rockstar mother to his kids, a man with a seven-figure fortune invested in his eSports teams and commercial businesses, a man who’s the spearhead of hundreds of millions of pounds being bet on his belief that tennis’s Davis Cup can be re-designed and re-initiated, a man who flies to Paris and Turin during his working week to interview Neymar and Gigi Buffon for an online magazine.

This is a man whose off-the-field actions and words have worried his somewhat prurient and often overly nosy employers so much that contract clauses and negotiations have been made sluggish while they try to make Pique bend to their will. Something in which they’ve failed. Yet here he was, now aged 32, after seasons when he’s been the dominant ball-playing centre-half in the world, when he’s won every important medal available to him at club and international level, showing unbridled, adrenaline-inducing levels of unchecked sporting aggression, which combined to pave the way for one of the all-time great performances of his career. Not only would he simply not be beaten in Madrid, but he drew others to him, rallied them when breath left their lungs and produced several moments of such extraordinary chutzpah that, I swear, even Messi’s jaw dropped.

Not far behind were Sergio Busquets and Ivan Rakitic. The former was booked virtually as soon as the game kicked off but was so smart, so careful and so collected that he never once (and this from a player who put the “street” in “street-wise”) sniffed the second yellow card that would have reduced Barcelona to 10 men and gifted Madrid a beautiful opportunity to win. It was Busquets who deftly nicked the ball off Toni Kroos‘ toes to start the move leading to Rakitic’s winning goal.

As for the Croat he is, frankly, at least the equal of any skill-set Luka Modric possesses. But he’s more athletic, younger and far more disciplined positionally. Modric is brave, technical, clever, admirable and many yards ahead of most of his colleagues in white shirts here, but Rakitic’s only real problem is that appreciating him, for the wider paying and journalistic public, isn’t en vogue.

Now that the dust has settled on this remarkable week, there are too many conclusions to be included in one column. But when Bernd Schuster compared Kroos to a “diesel tractor,” his metaphor was apt. The German midfielder might keep on going but at the wrong pace, without acceleration and without much cognisance of the fact that he was bought as a Ferrari, not a Massey Ferguson.

Santi Solari is worth a mention, too. Given how his midfield played in midweek, it was a scandalous misreading to start all three of Modric, Casemiro and Kroos again, without giving Dani Ceballos due respect and naming him in the XI. Madrid’s midfielders were outpassed, out-run and out-worked.

As for the Bernabeu faithful, their vicious reaction to Bale being subbed off was quite disproportionate to what he’s done for Madrid while on their payroll, but within a spectrum of how you might react to both his recent petulance at Levante and a bloodless, anodyne night when Los Blancos needed heroes and hard work. They needed guys who felt like Pique, Rakitic and Busquets evidently felt: “I will win this, no way will I be bested by anyone.”

It was awesome to watch, and admirable in the results that sentiment has yielded this week. It was also awful for Madrid, who now need to find another 10 players like Reguilon before they face Ajax in what has become an all-or-nothing night for their season.