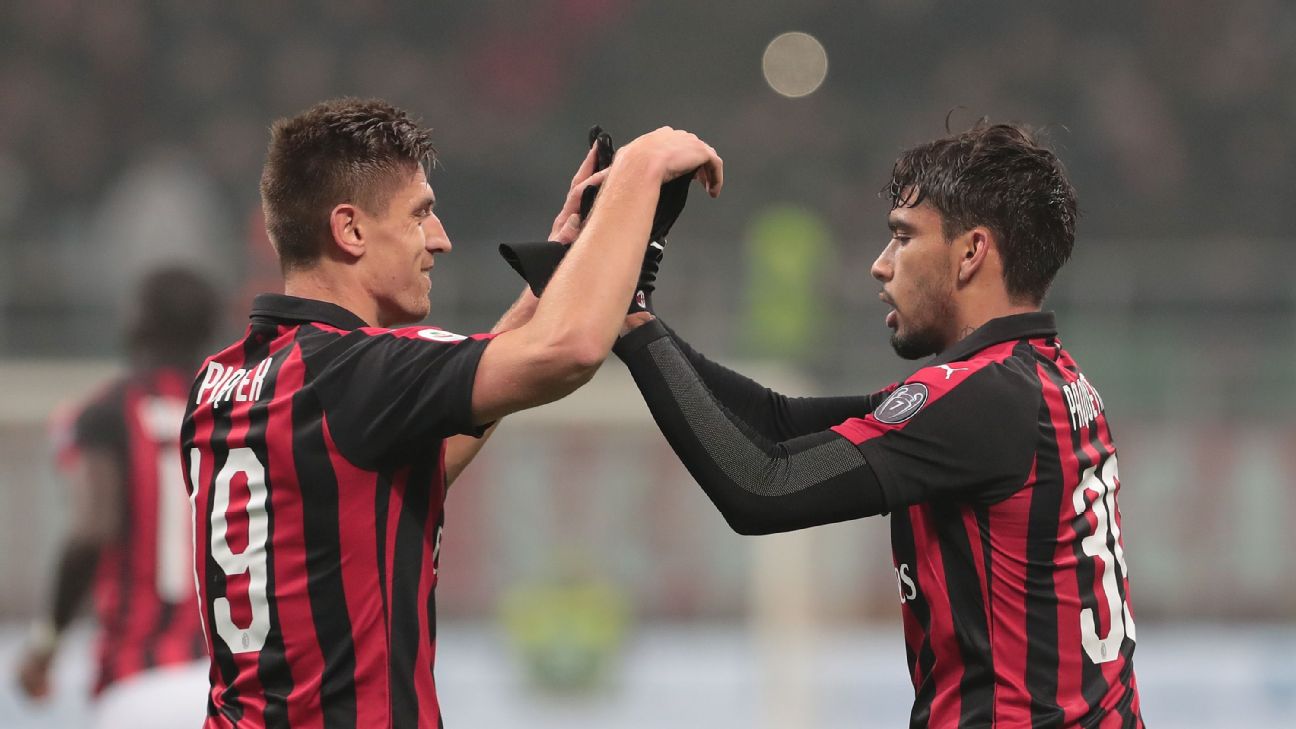 Last Friday afternoon, Gennaro Gattuso walked into his pre-match news conference and did what he always does. He walked down the aisle to his desk, exchanging a few words and shaking some hands only to notice that a couple of the reporters were not in their usual places. To great curiosity and no little amusement, Gattuso politely asked if they would move. Sitting to his left wouldn’t do. Not when the recent uptick in Milan’s results has coincided with this particular pair of journalists questioning him from the right of the conference room.

Both stood up and did as Gattuso wished. The following evening Milan beat Atalanta in Bergamo, a huge game in the race for Champions League qualification. “Are you superstitious?” Gattuso asked DAZN presenter Diletta Leotta. “A little,” she said. “But not as much as you.”

Gattuso replied: “I’m not superstitious,” an answer given with a knowing glint in his eye no doubt informed by the mania of his superstition.

There’s something very simpatico about Gattuso, a likability that makes it hard not to root for him. This Calabrian who used to sit in awe as the fishermen pulled in their nets on a morning shares the same everyman congeniality of his mentor Carlo Ancelotti, a man who never lost the human touch he learned on the family farm in Reggio Emilia.

Last weekend’s win was perhaps the biggest of his managerial career. Even in the form Milan were in, I must admit I didn’t expect it. Not after seeing Atalanta pulverise Inter and Juventus at the Atleti Azzurri d’Italia. Momentum and recent history looked to be with Gian Piero Gasperini’s side.

Atalanta have succeeded in making Milan look silly over the last few years. Think about it. Atalanta have a fraction of the budget and wage bill. They have sold Milan some of their best players (Giacomo Bonaventura, Franck Kessie, and Andrea Conti), making an €87 million profit on transfers during Gasperini’s time at the club. Over the same period, Milan have by contrast made a €363m loss in the transfer market, receiving considerably less bang for their buck. Ahead of Saturday’s game, if you totalled up the points over the last two and a half years, you would have found that Atalanta had amassed 170 to Milan’s 166.

But Gattuso went some way to restoring the natural order of things on Saturday. The satisfaction it brought was about more than simply putting an end to the awkwardness of not winning this fixture since 2015. The victory meant that, as with Roma, Milan’s other dogged rival for fourth spot, they now hold the head-to-head advantage should the season end with the two level on points.

Belief in ending a five-year wait for Champions League football is growing. Milan have not had 42 points at this stage of the season since Massimiliano Allegri was sending out Thiago Silva and Zlatan Ibrahimovic in red and black. Confidence in Gattuso making it stick is to be found in last year’s numbers. In the second half of the 2017-18 season, only Juventus and Napoli picked up more points than Milan. And as for 2018, Gattuso’s record over the calendar year was exactly the same as Luciano Spalletti’s at Inter.

Scepticism endures though and the 41-year-old is never more than one bad result or lacklustre performance away from the usual grumbles about whether Milan are really sure they can’t do better. Put it down to the view of Gattuso as all passion and no philosophy, never mind that this viewpoint painfully ignores that the restoration of identity, standards and spirit is exactly what’s required at Milanello these days over some empty tactical gimmickry with its own hashtag and social media cult. That Milan are fourth and even have the chance of catching Inter is something of a minor miracle given how ravaged the team has been by injures and the buzzkill of a sulking Gonzalo Higuain on the rebound from Juventus.

Of course so much of the feelgood factor around Milan at the moment stems from overcoming all that without allowing it to compromise their season. Players who were key when they got hurt now face a hard time making it back into the team. Part of that is down to the coaching job Gattuso has done with players like Tiemoue Bakayoko, who is back close to his Monaco best. Then there is the instant impact of winter signings Lucas Paqueta and Krzysztof Piatek to consider.

This trio has transformed opinions of Leonardo’s first two transfer windows from negative to positive. While Bakayoko needed some time to adapt, Paqueta and Piatek have hit the ground running which is rarely the case with midseason reinforcements, particularly as in the Brazilian’s case, this is the player’s first experience in Europe, in a different league and with a new language to learn. Paolo Maldini revealed that upon arriving at Milanello, the club asked Paqueta to accelerate his integration into Italian football. It was hardly straightforward for him when you consider that unlike in the past when Milan had a colony of Brazilians, there are no Portuguese speakers on the current squad.

It hasn’t slowed the intelligent, level-headed 21-year-old though. Gattuso says he is like a “sponge” absorbing and retaining the new concepts he is shown in training. For all the skill Paqueta possesses, which he wasted no time in displaying with a rainbow flick and a volleyed shot that careened off the woodwork on his league debut against Genoa, the substance of his performances over 90 minutes is now eclipsing moments of style clipped up for Twitter. That he coped so well against as physical and intense an opponent as Atalanta in a high stakes game, also indicated that all the character references and technical reports Leonardo got from his “informers” at Flamengo were on the money.

As for Piatek, many wondered if the Pole could keep the fire of his hot streak burning at a club where every No. 9 since Filippo Inzaghi retired has played as if under some peculiar goal-extinguishing curse. He out-performed xG at Genoa becoming a somewhat renowned specialist in unexpected goals, leading the analytics community to quite justifiably query his ability to keep scoring at a Ronaldo-esque rate.

Fears that Milan were letting one of the best in the world go for a flash in the pan who might have a lower ceiling were by no means illegitimate. But the move now looks inspired. Piatek scored a brace to dump Napoli out the cup, sucker-punched Roma at the Stadio Olimpico and dispirited one of the most spirited teams in Serie A in Atalanta with an astonishing equaliser as well as the final goal in a 3-1 win. Six months after moving to Italy for little over €3m, Piatek is still somehow contriving to make the €35m Milan just paid for him look like an absolute bargain. He is averaging a goal every 59 minutes for them.

Nicknamed “Robocop” by Gattuso for his machinelike approach to scoring, the Milan coach joked on Saturday that just as a baby’s first word is usually “mamma,” Piatek’s must have been “goal.”

Overlooked in a lot of the analysis of Milan is the fact that Lucas Biglia and Bonaventura’s injuries and the abrupt exit of Higuain have made an already young team even younger. Gianluigi Donnarumma has put last year’s turmoil behind him and the Gianluigi Buffon comparisons all of a sudden don’t look so crazy anymore. Alessio Romagnoli has helped marshal the defence to eight clean sheets in Milan’s last 15 games, captaining the team with an authority and displaying a Sergio Ramos-like knack for scoring big goals late in games. Even Hakan Calhanoglu is rediscovering his form thanks in no small part to the faith of Gattuso; all just as Biglia and Mattia Caldara prepare to return

The signs are positive. Milan have a head of steam to take into games against Empoli and Sassuolo at the San Siro, followed by trip to bottom club Chievo and then the Derby della Madonnina. A team that has finished 8th, 10th, 7th, 6th and 6th in the last five years finds itself in a great position. Caution is still necessary, particularly as things are beginning to click for Roma and require Milan to look over their shoulder. But with the Mauro Icardi saga threatening to throw a spanner in Inter’s works, the Rossoneri need to keep an eye on the road ahead too.

Touch wood and Milan will be listening to the Champions League anthem next season. For some superstition isn’t the way. However, you try telling Gattuso that.