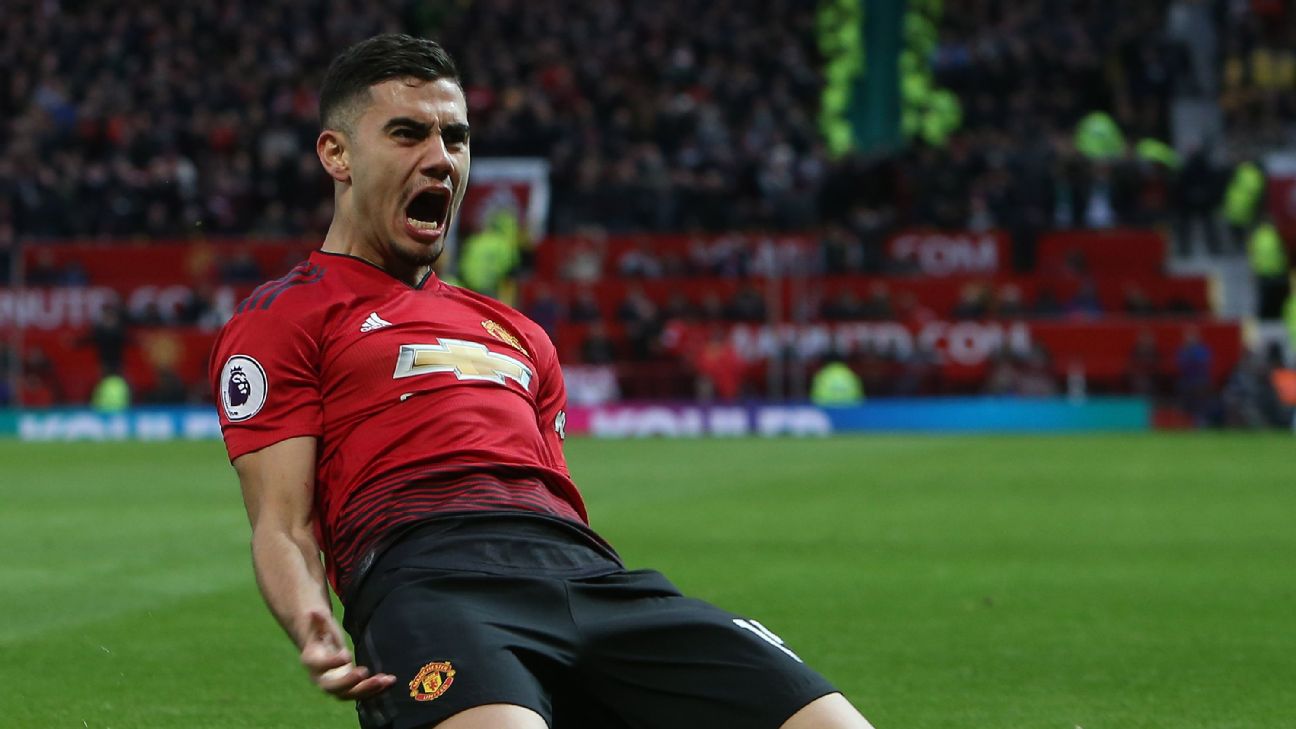 The joy on the face of his Manchester United teammates showed how much Andreas Pereira’s superb goal against Southampton meant. The Brazilian midfielder, who also set up one of Romelu Lukaku’s two goals, has endured a difficult few months, but like fellow young midfielder Scott McTominay, enjoyed last week.

Injuries to established midfielders gave academy graduates McTominay and Pereira opportunities and, given manager Ole Gunnar Solskjaer will be without Nemanja Matic, Juan Mata, Ander Herrera, Jesse Lingard, Anthony Martial and Alexis Sanchez against Paris Saint-Germain on Wednesday, as well as the suspended Paul Pogba, both are in line to start. United trail 2-0 at the halfway stage of the Champions League round-of-16 tie.

Pereira is happy that Solskjaer has confidence in him, though that should not be read as if Jose Mourinho did not. He did not agree with Pereira’s decision to go on loan to Valencia last season, but that was actually a compliment to the player. Mourinho wanted him at Old Trafford, but after a fine preseason Pereira was not included in the first three Premier League matchday squads, so made the correct call to spend the season elsewhere.

Valencia was a positive experience for Pereira. Playing in a team strong enough to finish fourth in La Liga, he had to be mentally strong to overcome an injury and subsequent operation that did not go smoothly. He also had to cope with fan and media dissent, as is the norm at Mestalla.

With players absent after the World Cup, he returned to Manchester knowing that he had to grasp his preseason chances. He scored with a wonderful free kick against Liverpool — having asked Alexis Sanchez to take it — before a crowd of 101,000 in Michigan, showing a star quality that Paul McGuinness, his youth coach at United, had long acknowledged.

“Andreas can score, he can shoot with both feet, he can take free-kicks and corners, create goals and be a crowd pleaser,” McGuinness said. “He’s a playmaker, an inside forward, although he can play up front. He can beat people. He could be a star.”

Pereira won the right to start a league match and, in the opening game of the season vs. Leicester, played 90 minutes as a deep-lying midfielder in a 2-1 win. He retained his place at Brighton the following week but, like his teammates, endured a day to forget and was withdrawn at half-time in a 3-2 defeat. He did make his debut for Brazil in September, but started just one more game under Mourinho — against Valencia, coincidentally — and was often left out of the squad entirely.

But the 23-year-old is one of many to have benefited from Solskjaer’s adept man-management. Pereira got minutes off the bench against Cardiff and Bournemouth, then started a FA Cup third-round win vs. Reading in a 2-0 cup win. At the end of January, he returned in the line-up for a league match at home to Burnley.

The game went badly, though, with Pereira making a mistake that led to a Burnley goal. It was impossible not to feel for him when he was substituted with United 2-0 down, but life as a top-level player is unforgiving.

Pereira never stopped believing, though — in God, in Manchester United and in himself — and also heard positive words from his manager. He trained well, then played well when he came on at Chelsea in the FA Cup fifth round, before disappointing no-one when he replaced the injured Ander Herrera 21 minutes into a huge game vs. Liverpool.

Noted for his attacking attributes, Pereira prefers to play as an attacking midfielder. Against Liverpool, though, he followed the instructions of his coaches to track opposing full-backs if they tried to overlap Sadio Mane and Mohamed Salah and threaten from crosses. His contribution was well-received as injury-ravaged United held the league leaders.

Pereira made his first-team debut more than four year ago in a calamitous 4-0 defeat at MK Dons in the EFL Cup. He is the last player who took part that night left the club, but is also out of contract in the summer. He knows his future is uncertain but feels, like any player, that he would benefit from more games to show his talent.

More experienced players will likely start when they return, which is why it is not easy to establish yourself in a top side. This is probably his last chance as a United player, but Pereira is popular in the dressing room. A polyglot, who speaks English, French, Portuguese and Spanish — a useful skill in today’s game — he is also seen as still improving as a footballer.

United have always given youth a chance, but players must perform. Fans know Pereira is talented, but does he have enough to become a regular? Did Jesse Lingard when he was 23? Pereira is more determined than ever to show what he is capable of and a good performance in Paris will help his cause. Having played well for Valencia at Barcelona and Real Madrid, he will not be daunted by PSG.